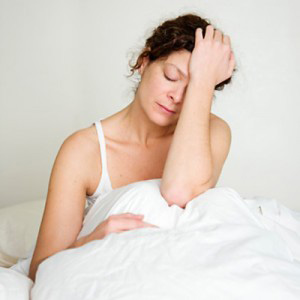 What are the perimenopause and menopause?

Natural menopause occurs when you have had no menstrual periods for at least one year without being pregnant.  Menopause occurring after surgical removal of the ovaries, or damage to the ovaries by medical treatment such as chemotherapy or radiation is called induced menopause.

The perimenopause is the transitional period lasting up to ten years from having normal menstrual periods to no periods at all.  During this transition, you may experience no symptoms at all or some combination of premenstrual syndrome (PMS) and menopausal symptoms.  Because most women experience menopause between the ages of 45 and 55, at an average age of 51, perimenopausal symptoms typically begin occurring throughout the 40s.  You can expect to experience menopause at about the same time as your mother or older sisters unless you have certain chronic conditions or health habits that promote early menopause.  These conditions include taking corticosteroid medications, smoking, or having an autoimmune or motor neuron disease.

What are some common perimenopausal changes?

Women’s fertility begins to decrease at about age 37, mainly due to aging eggs.  The risk of spontaneous miscarriage increases to about 50% by age 45.  The risk of chromosomal abnormality in the fetus increases with each year to 1 in 40 by age 45.  Women in their 40s tend to have more pregnancy complications such as premature labor, stillbirth, and delivery by caesarean section.  The risk of such pregnancy complications is already higher in many women with disabilities.  If you do not wish to get pregnant during the perimenopause, please be sure to continue using contraception, as pregnancy is still possible until complete menopause is reached.

About two-thirds of all women have hot flushes, the most common symptom during the perimenopause.  A hot flush or flush consists of a sudden hot feeling in the face, neck, and chest, blushing, faster pulse, and sometimes perspiration, often followed by a chill, lasting from three to six minutes.  The most common duration of hot flushes is three to five years.  Hot flushes that occur with heavy perspiration during sleep are called night sweats.  Night sweats and hot flushes may interfere with sleep, as can falling estrogen levels alone.  Inadequate sleep in turn triggers irritability and fatigue.  Environmental conditions that may trigger hot flushes include:

Avoiding these conditions as much as possible will help reduce the number and severity of hot flushes.

As a result of natural decreases in estrogen, the tissues of the vulva (outer genital area) and the lining of the vagina become thin, dry, and more alkaline, making them more prone to injury.  Atrophic vaginitis, which is vaginal inflammation, not an infection, may result. You may notice redness, itching, irritation, and discharge.  These symptoms should be examined by a physician to rule out other causes such as infection.  Regular sexual activity will help prevent vaginal atrophy. Without treatment, this condition can cause painful vaginal ulcers that make sexual intercourse impossible.  Vaginal lubricants may help mild cases, but prescription estrogen is the most effective for restoring the thickness and elasticity of vaginal tissues.  A daily diet rich in soy foods may help reduce vaginal discomfort in a few weeks.

Urinary problems may occur when the lining of the urethra also becomes thin and the surrounding pelvic muscles weaken.  More frequent urination, urgency when the bladder is not full, frequent nighttime urination, incontinence, and painful urination may result.  If you already have some of these problems due to having a neurogenic bladder, they may become more severe with menopause.  Smoking, drinking alcohol or caffeine, bladder infections, weakening of the pelvic muscles and ligaments due to previous childbirth or natural aging, and taking diuretics and some tranquilizers may also increase incontinence.  As many as 40% of women aged 45-64 have urinary incontinence.  Bladder studies by a urologist may be needed to determine the exact cause.  Estrogen pills, patches, and vaginal preparations improve incontinence for 40-70% of women.  Surgery may be needed to correct anatomical defects.

Women with mobility impairments, particularly due to MS and SCI, already have a high frequency of bladder infections.  Taking antibiotics often in turn causes more vaginal yeast infections.  Menopause increases the risk of infections by increasing the vaginal pH so that it is less acidic.

Most women surveyed report that they experienced no changes or improvements in their sexual relationships with menopause.  Many women remain sexually active even when very old.  However, low hormone levels in midlife may lead to reduced sexual desire, or painful intercourse due to vaginal thinning, dryness, narrowing, and shortening.  These conditions are often worse in women with disabilities.  Women’s sexual activity and interest during midlife may also be influenced by:

Women with reduced sex drive may benefit from testosterone replacement, which greatly diminishes at menopause.  Before menopause, testosterone is produced by the ovaries and adrenal glands; only adrenal production continues after menopause.  Androgens such as testosterone are important for maintaining sex drive and bone density.  If you have rheumatoid arthritis, testosterone may decrease your disease activity.  Testosterone Estarate may be prescribed, which combines estrogen and testosterone.  Taking too much testosterone without estrogen may deepen the voice, cause baldness or facial hair, or increase muscle mass.

During the perimenopause, the frequency of ovulation (egg release) decreases and hormone secretion by the ovaries becomes erratic.  As a result, most women experience irregularities in their menstrual periods.  It’s a good idea to keep a record of the dates your periods start and stop, the amount of flow, blood clots, and pain.  This record will help your health care provider distinguish what’s normal from what’s abnormal for you.  Remember that every woman’s cycle is different.  Changes may include:

When should you be concerned that perimenopausal bleeding may not be normal?

Any trend toward increased bleeding should be checked by your health care provider.  In particular, any of the following changes may signify abnormal bleeding:

Following are possible causes of these abnormal menstrual changes.

If your health care provider decides that your perimenopausal bleeding is abnormal, there are several procedures that can determine the cause.  These include endometrial biopsy, D&C, hysteroscopy, or transvaginal ultrasound.  If your health care provider orders one of these procedures, you can find out more about it in the Menopause Guidebook by the North American Menopause Society on the following
Other causes of abnormal menstrual bleeding may be related to your disability.  Women on long-term corticosteroid therapy for rheumatoid arthritis, lupus, lung disorders, or other chronic conditions often have hormone imbalances with irregular or heavy menstrual bleeding.  After spinal cord injury, menstruation may cease from a few months to more than a year, sometimes permanently if the woman is near menopause.

What are the treatment options for abnormal perimenopausal bleeding?

The perimenopausal period is the most vulnerable time for hysterectomy, the surgical removal of the uterus.  However, hysterectomy should seldom be the first treatment choice for abnormal bleeding.  Depending on the cause of abnormal uterine bleeding, treatment options include:

The folklore surrounding menopause dictates that menopausal women are moody and irritable.   Many experts believe now that menopausal moodiness may be due more to sleeplessness and poor sleep caused by  hot flushes and night sweats than to estrogen deficits per se.  However, many women have reported an increased feeling of well-being after replacing estrogen.  Estrogen can have an antidepressant effect due to its effect on brain neurotransmitters.  Midlife stress may coincide with menopause and lead to depression and anxiety.

In addition, women with mobility impairments may have increased problems during the perimenopause with:

What major health problems increase in risk with menopause?

In addition to being a woman with a mobility impairment, past menopause, and getting older, other risk factors for osteoporosis are:

Clues that you might have osteoporosis are prolonged, severe pain in the middle of the back, change in the shape of the spine, loss of height, tooth loss, and fractures.

It is recommended to consider the following when deciding whether a woman should use ERT/HRT or other treatments:

If you elect to replace hormones and do not have a uterus, you only need to replace estrogen (ERT).  If you do have a uterus, progesterone must be added to prevent excess buildup of the uterine lining and an increased risk of uterine cancer (HRT).  Estrogen with progestogen has proved to be as effective as estrogen alone in treating menopause symptoms and reducing risk of heart disease and osteoporosis.  HRT can be taken as a combination pill or patch.  Both hormones can be taken every day (continuous combined schedule), or estrogen can be taken alone most days with progestogen added for part of the month (cyclic schedule).  Vaginal spotting and bleeding may occur during the first six months of HRT, especially on the cyclic schedule.  You may elect to use micronized natural progesterone to avoid possible side effects from synthetic progestin such as lowering HDL, fluid retention, headache, breast tenderness, and alterations in mood.  However, do  not rely on over-the-counter progesterone creams to oppose estrogen replacement, as not enough progesterone is absorbed through the skin to protect the uterus against cancer.  If you have a history of breast cancer, blood clotting disorders, or liver disease, you may not be a good candidate for HRT.  Be sure to discuss with your health care provider the pros and cons in relation to your risk factors.

ERT/HRT will relieve hot flushes, night sweats, sleep disturbances, vaginal thinning and dryness, skin thinning and loss of elasticity, and urinary symptoms that are not caused by neurological or mechanical impairment.  It can be taken orally or applied as a skin patch.  An estrogen cream, ring, or tablet can be applied vaginally to relieve vaginal symptoms alone.  Women tend to experience the fewest side effects with the estrogen tablet and are less likely to discontinue using it than the cream form.

Women who take ERT/HRT have a 35-50% reduced risk of getting cardiovascular disease compared to women who do not use it.  Estrogen reduces this risk by raising HDL (good cholesterol), lowering LDL (bad cholesterol), reducing the growth of fatty deposits in blood vessels, and dilating blood vessels.  Testosterone should not be added if you are at high risk of heart disease or have low HDL levels (good cholesterol) because it reduces HDL.

Menopause speeds up bone loss (osteoporosis), especially during the first decade after menstruation stops. Having osteoporosis, in turn, increases the likelihood of having fractures of the spinal vertebrae, hip, forearm, pelvis, and ribs.  All postmenopausal women should have their bone mineral density (BMD) tested to detect osteoporosis.  Calcium, 1200-1500 mg daily, will help slow down bone loss.  Younger women should have BMD testing if they have a fracture from any cause.  Even if you delay starting HRT until age 65, your protection against fractures will increase more than 60% compared to women who have never used HRT.  Taking testosterone along with estrogen can promote new bone formation as well as preventing future bone loss.  Other drugs such as rezindronate, alendronate, etidronate, calcitonin, or raloxifene may be taken instead for osteoporosis.  However, these drugs will not help any other symptoms associated with menopause.  You may also reduce your risk of osteoporosis by ingesting natural phytogestrogens, which are plant-derived, estrogen-like agents, or ipriflavone, a synthetic derivative.  Phytoestrogens are plentiful in flaxseed, red wine, and soy products such as tofu.

HRT may offer additional benefits to women with disabilities such as multiple sclerosis and spinal cord injury.  Estrogen substantially increases skin thickness and collagen content, which can prevent, or improve healing of, pressure sores.  It may also improve urinary function by reducing the risk of infection, bladder spasm, and incontinence.  Replacing estrogen may slow disease progress in MS and rheumatoid arthritis.

Other prescription drugs may be taken to relieve hot flushes, such as clonidine, progestogen, and megestrol acetate.  Certain medications used to treat depression, such as Effexor, may be prescribed in low doses to alleviate hot flushes, even if you are not depressed.