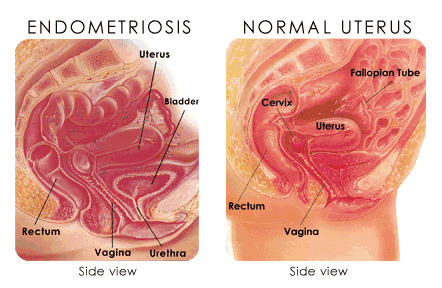 Mild forms of endometriosis are common and may not require treatment. But, endometriosis can also cause moderate to severe pain with your cycles (dysmenorrhea) as well as painful intercourse (dyspareunia) and also  make it difficult for a woman to become pregnant.

The cause of endometriosis is unknown. Some experts believe that pieces of endometrium travel back through the fallopian tubes and pass out into the pelvic cavity — the space inside the pelvis that holds the reproductive organs. Tiny pieces of tissue may lodge on surfaces of the reproductive organs. During menstruation, the tissue bleeds, just like the endometrium inside the uterus. Blood from these areas can cause irritation of the surrounding tissue which may become swollen and inflamed. Over time, scar tissue and cysts (endometriomas) can form.

What Are the Symptoms of Endometriosis?

Many times, endometriosis has no symptoms. When symptoms are present, they may include:

Who Can Get Endometriosis?

Any woman who has menstrual periods can get endometriosis. Endometriosis occurs most often between the ages of 25 and 40, but it also can occur in younger women. The condition is most common in women who have not had children.

Endometriosis is not cancer. Endometriosis also does not increase a woman’s risk for uterine or other cancers.

How Do I Know If I Have Endometriosis?

If you have any symptoms of endometriosis or are having difficulty becoming pregnant, contact your doctor. After obtaining a thorough medical history, he or she will perform a routine physical and a pelvic exam.

If endometriosis is suspected, you may need to have a procedure called diagnostic laparoscopy. In this procedure, the doctor inserts a small tube attached to a camera through an incision in the abdomen. He or she examines the reproductive organs and pelvic cavity using the device. A sample of tissue may also be gathered for testing, called a biopsy. However, because laparoscopy has some risks, often the diagnosis of endometriosis is presumed and a treatment plan is started without doing this procedure.